A. History and Background. 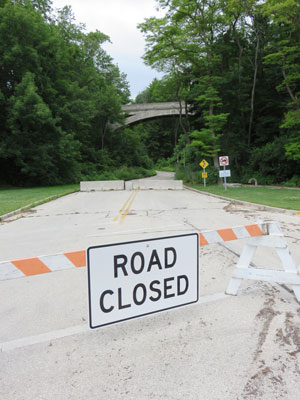 1. Lake Park was one of the very first places acquired for purposes of a public park by the City of Milwaukee Park Commission headed by Christian Wahl.

2. The plans and design for Lake Park were created in the early 1890’s by the famous Frederick Law Olmsted firm working in conjunction with the City of Milwaukee Park Commission.

3. Lake Park is the only park in Milwaukee County which has been listed on the Federal Register of Historic Places (1993).

4. The concrete arch footbridge spanning Ravine Road (1905) was designed by the famous Wisconsin architect Alfred C. Clas who was also at that time a Park Commissioner and who along with his partner George Bowman Ferry also designed hundreds of famous buildings including Milwaukee’s Central Library, the State Historical Society headquarters building in Madison, the Frederick Pabst Mansion in Milwaukee and the First Unitarian Church in Milwaukee.

5. From an engineering standpoint, the footbridge has been described as “an advanced and innovative work of reinforced-concrete bridge engineering,” and as “one of the earliest extant reinforced concrete arches in Wisconsin.”

6. The footbridge is but one structure in a cluster of structures designed to fit together stylistically and functionally, including the Pavilion (1903) and the Grand Staircase (1908).

7. The footbridge spans the largest ravine in Lake Park and connects the north and south portions of the Park. It serves many thousands of walkers, runners and bicyclists. The footbridge is also a special destination for birders especially during the spring and fall migrations.

8. In 1983 Lake Park was designated by the City of Milwaukee’s Common Council as being part of an historic district called North Point North Historic District. The relevant portion of the Guidelines for the North Point North Historic District governing Lake Park requires that, “Every attempt should be made to maintain the historic vehicular and pedestrian circulation system in the park including drives, paths, stairways and bridges.” The Guidelines also provide that, “New parking areas, roadways, paths and bridges should be designed so as to be compatible with the historic character of the park.” Therefore it would be a violation of these Guidelines if the Lake Park Concrete Arch Footbridge were to be replaced with a bridge that is not substantially similar in style to the footbridge that was designed in 1905 by Alfred C. Clas.

9. As evidenced by its heavy usage by people from all over the county and beyond, Lake Park is the crown jewel in Milwaukee County’s Park System, and nothing should be done to diminish its luster.

B. Status of Footbridge Replacement Efforts and Plans.

1. Until the footbridge is rebuilt, Ravine Road below it cannot be reopened due to the potential for spalled concrete falling from the bridge on vehicles or pedestrians below.

2. Based on an in depth inspection report prepared by Graef-USA for Milwaukee County Parks Department, it was determined that rehabilitation of the existing bridge was possible, but that this approach would require the replacement of much of the bridge and that the resulting rehabilitated bridge would have to be fully replaced within 15-25 years. Thus, this approach was deemed by everyone including the Lake Park Friends to be uneconomic and therefore unwise.

3. Following a thorough consideration of options, including a meeting which included representatives of the Lake Park Friends and the Historic Water Tower Neighborhood, the County decided to request proposals for professional consulting services for the planning and design of a replacement bridge (RFP).

5. In response to the RFP, five proposals were received. On February 10, 2016, the Consultant Selection Committee (which included a representative of the Lake Park Friends) selected GRAEF as the winning consultant. GRAEF’s proposal contains a Project Schedule which outlines various action dates during April, May and June, 2016 involving the various players in the Planning and Schematic Design process. As things progress, this report will be updated to reflect that progress.