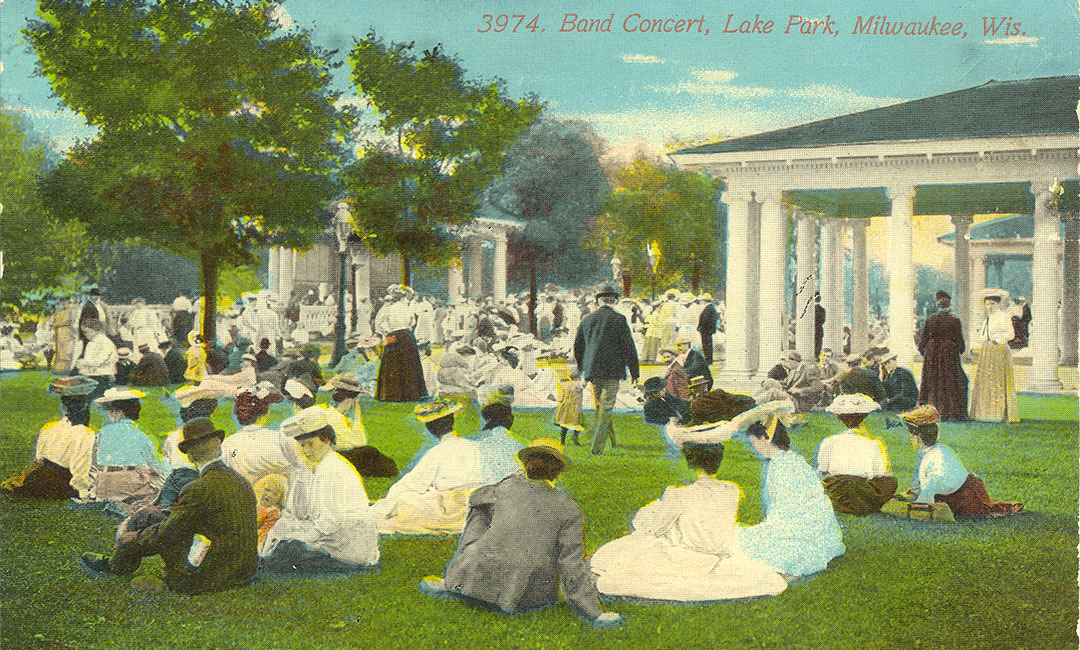 Lake Park is located on land the known history of which stretches back into antiquity. A prehistoric Indian Mound reminds today’s park visitor of the original inhabitants of the area. Although we do not know who built this mound, it is believed to have been peoples of the Mid-Woodland Culture (300BC-400AD), primarily hunter-gatherers who constructed mounds as burial or ceremonial centers. Originally one of a series of conical mounds that were later destroyed (some even in the development of the park), this single mound is the last known remaining within the city of Milwaukee. In 1910, the Wisconsin Archaeological Society placed a historic plaque on the mound in order to ensure its preservation.

From prehistoric times, Native Americans had lived in and passed through this area. However, in 1835, tribal lands were surveyed by the U.S. government and sold to settlers, many of whom lived in eastern cities and desired these lands for their timber. One notable exception was Gustav Lueddemann, who purchased a large part of what is now the northern section of the park in 1849. He built his home there, keeping much of the native forest intact, and opened his grounds to the public as a picnic and recreation area, known as “Lueddemann’s on the Lake.” This northern section still retains the oldest native trees and vegetation in the park.

In 1854, the U.S. Lighthouse Service acquired 2 acres on which to build North Point Lighthouse and Keeper’s Quarters. Erected in 1855, by 1888 these structures had to be rebuilt and moved 100 feet to the west to avoid creeping bluff erosion. This 2-acre piece of land, stretching from Wahl Ave. to Lake Michigan, bisected the area on which the City of Milwaukee desired to build Lake Park and in 1893, park builders received permission from the federal government to complete their plan without disturbing the lighthouse. Thus, the beacon from the lighthouse guided ships on Lake Michigan for 139 years until the U.S. Coast Guard decommissioned it in 1994. Through a joint partnership of Lake Park Friends and Watertower Landmark Trust, a citizen group, North Point Lighthouse Friends, Inc., was formed and has worked since that time to restore and preserve these historic structures. In 2003, the property was formally transferred to Milwaukee County. Now, finally part of the park, and enjoying placement on the National Register of Historic Places since 1984, the lighthouse has been renewed. In 2007, the property opened to the public as a maritime museum/conference center.

Already by 1860, forwarding-looking Milwaukee leaders voiced desires to build a series of parks for the respite of inhabitants of the growing city. Considered “gardens of the poor,” these parks were to offer the joys of natural beauty to citizens who could not afford the manicured gardens of the wealthy. Acquiring land, however, took time. The major impetus came in 1889, when the City of Milwaukee created its first Park Commission, under the presidency of Christian Wahl. They immediately began to purchase acreage for parks throughout Milwaukee and contacted the eminent landscape architect Frederick Law Olmsted to design three parks, Lake Park, River Park (now Riverside Park), and West Park (now Washington Park), plus Newberry Blvd. connecting Lake and River Parks. Of the three, it is Lake Park which today most closely retains the original form and intent of its designer.

Olmsted’s vision reflected the “Romantic” style of the great parks of Europe – great stretches of open, meadow-like spaces interspersed with large trees left to develop their open growth, sinuous paths leading to surprising vistas, wilder areas of shrubbery and undergrowth to add mystery and for the protection of wildlife, preference for natural rather than formal landscaping and gardens, and the attractions of bodies of water. In Lake Park, Olmsted could take advantage both of Lake Michigan and the streams running through the ravines. This emphasis on natural beauty was, he felt, both psychological and morally restorative to the city dweller living in cramped spaces. He was very democratic and resisted all attempts at privatization, insisting that his parks be open to all people without charge. He distinguished between two forms of recreation: “active” (sports and playgrounds) and “passive” (walking, attending concerts, enjoying nature) and provided for both, cautioning that “active” areas not be so large or so many as to disturb persons coming to the park for “passive” reflection and enjoyment.

Work on the park was intense during the following decades, commissioned by the Milwaukee Park Commission under the supervision of the Olmsted firm, who made frequent visits to the city. Walks, carriage drives, ravines with paths, brooks, waterfalls and rustic bridges (designed by Christian Wahl) were completed by 1894. Steel Arch and Brick Arch Bridges designed by Oscar Sanne were built by 1893. In 1895, the Milwaukee Electric Railway and Light Company’s tram station, designed by Howland Russell, brought visitors to the park to enjoy free concerts sponsored by the tram company. A formal entrance to the park at Newberry Blvd. was planted in 1896. The park’s famous “Lion Bridges” spanning the lighthouse ravines were completed in 1896-7. Bridge design was by Oscar Sanne; the lion sculptures were designed in plaster by Paul Kupper, which Otto Lachmund, a stonecutter, then cast and carved under Kupper’s direction, and were donated to the park by the Electric Railway and Light Company. By 1898, fill in part of one of the ravines resulted in the creation of a large open meadow. In 1899, a “horse barn” was completed. In addition to housing the park’s horses, this building also provided space for tools, blacksmith shop, and park offices; today it serves as the park’s service building. In 1903, the Pavilion and Band Shelter, designed by the firm of Ferry and Clas, was opened to the public. The firm also designed the Concrete Footbridge north of the Pavilion (1905) and the Grand Staircase leading up to it (1908).

Opportunities for “active recreation” were considered early in the park’s history. A 6-hole golf course was built on the open meadow in 1903; in 1930 it was expanded to 18 holes. A children’s playground was built in 1906. Tennis courts were installed by 1909. Lawn bowling appeared in the park by 1919; later, new bowling greens (1961) and clubhouse (1962) were erected. Ice-skating on then-existing ponds was popular early in the century. In l965, an ice-rink warming house was built in the area which had once been the Lueddemann’s home, later a children’s pavilion, and today offices of Lake Park Friends. In more recent years, other opportunities to enjoy sports have been provided, including an above-ground ice rink and baseball and soccer fields. However, true to Olmsted’s caution that these not be too large or too numerous, they remain simple fields which revert to open “meadows” in off-season periods. A County bicycle path was built in 1967 and an exercise/jogging trail in 1978.

Wars have also left their impact on the park. An equestrian statue honoring Civil War physician, Brigadier General Erastus B. Wolcott, donated by his surviving wife Laura Ross Wolcott, M.D., was erected in 1920. Following WWI, three memorial plaques were placed in the park dedicated to the soldiers of that war. And the Cold War that followed WWII saw the placement of a Nike missile tracking station in the park – which, with waning fears of a Russian invasion, was removed in 1970.

Erosion along the bluffs has been a perennial problem for the park, which has been met in several ways, some controversial. In 1905, a beach was created to protect the cliffs and to make it possible to lay out a “Shore Drive” envisioned by the Olmsted firm. In 1929, this road (now “Lincoln Memorial Drive”) was widened and extended through the north part of the park to accommodate growing automotive travel. In 1999-2000, the drive was further rebuilt with a center division. Both along the lakeshore and within the park, parking lots have needed to be constructed. Another solution to combat erosion has been placing of fill along the lakefront, resulting in the extension of the park’s eastern boundaries and creating what is now “Lake Park East,” an area primarily used as a soccer/rugby field. For many years, this area had been the location of a gun club.

A major political change occurred in the 1930’s (1934-7) when the City of Milwaukee transferred park lands to Milwaukee County with the proviso that they always be used as public park land. In 1995, the County rented out the upper level of the Pavilion to a private restaurant (“The Bistro”) but with the stipulation in the lease that “the entire first floor meeting room shall remain open and available to the public.”

A long-sought designation for the park was achieved in 1993 when, through the work of historians Virginia Palmer and Lynne Goldstein, Lake Park was placed on the National Register of Historic Places, honoring both its conception as the work of a great landscape designer and as a site where once Native Americans lived and built their mounds.

Citizens who have long enjoyed the beauties of this wonderful park have taken up the challenge implicit in this honor. On April 15, 1996, “Lake Park Friends” was officially incorporated as a non-profit group with the stated mission, “to promote the preservation and enjoyment of Lake Park, to sponsor educational, recreational and cultural events in the park, and to raise funds for the restoration and enhancement of the park in the spirit of Frederick Law Olmsted.” Through our many activities, including concerts, history and nature walks, and stewardship of the park’s natural areas, we hope to carry on Olmsted’s vision of a beautiful and restorative park open to all.